My stay in Japan was strange, indeed.  When I first arrived in Japan in 1995, I was immediately presented with media opportunities, simply for being a “gaijin” (foreigner).  I was in print magazines, table mats at family restaurants, even a sporting catalog despite my frail and sickly white physique.  I was appearing on TV in various programs. I even shared the screen in a few episodes of a show with the great Katsura Sanshi.  I had been in a few of NHK dramas (Asa no Dora and a history program).  I had been in TV commercials for Ajinomoto and Panasonic.  Everything I touched turned to ash.  I could not remember my lines and was completely uncomfortable in front of the camera.  Once, during an episode of “Hustle Family” (ハッスル家族) I had humiliated the actors (Kiyoshi Nishikawa, Tomohiro Takayama and others.) I had not memorized my lines and could not get through the episode.  They had to keep stopping the cameras.  In a frenzy, the actors tried to rewrite my lines by giving me something easier to say.  Even then, I could not act the part.  I was never invited back to the show.  Directors were complaining about me, and it seemed my “career” was all but over. 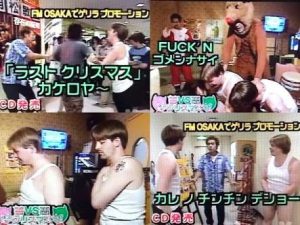 As I worked my way down the ladder of success, and hit that last rung, I found a bit of success.  I appeared in a series called Chougoukin – Fujiwara Brothers.  The show was quite simple.  The stars of the show, two comedians called Fujiwara brothers, would be trying to accomplish something.  For example, in the image above, they were trying to release a music CD at Tower Records.  I was part of the “f*** brothers” duo.  Our job was to simply sabotage whatever plans they had.  And so that’s what we did for many episodes.  The show was quite crude.  It often had nudity with comedians pouring strange substances into bodily orifices.   There was little regulation, and I was even allowed to get drunk before filming.

We would always make our entrance wearing a swim suit and tank top, while singing Last Christmas by Wham.  We’d argue with the stars of the show a bit in Japanese, and after the argument heated up, they would give us a titty twister.  At that point, we’d be so infuriated that we’d give them the middle finger, and yell “F*** you!” at the top of our lungs.  Then we’d go into an all out brawl.  I actually got hurt once and had to see a chiropractor for many months, but nobody cared.  Again, no regulations.  Sound crazy?  Well, it was.  But it also turned out to be quite a hit.

It was not long before I had people stopping me on the street, asking for an autograph.  They would want me to pose, while giving the middle finger, or sign “F*** you” on one of their possessions.  It was crazy!  Even once, with two babies in a stroller, I had to stop to take a picture.  My wife was so embarrassed and never wanted her family to find out about this show.

At that time, I was also teaching English at my home and some of my students quit.  Others liked it though.  As for me?  I just look back on it as on odd experience.  I stay in touch with the other “actor” (if that’s how you’d call us) from time to time.  I even visited him in Japan a few years ago.