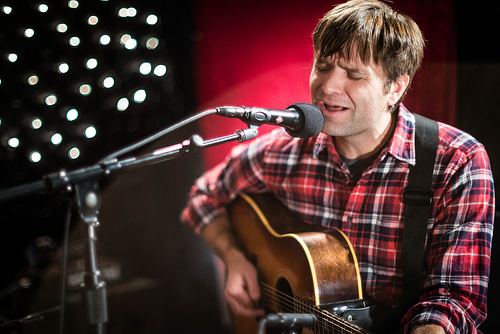 Oh boy. The moment the blogosphere erupted with the news that Death Cab For Cutie's Ben Gibbard and lovable actress Zooey Deschanel, America's foremost indie-pop power-couple, had split up, we knew it'd be coming. Former Lives is every bit the wistful post-breakup solo album you'd hoped it wouldn't be.

Gibbard actually has a decent side-project pedigree. The excellent Postal Service album Give Up dished out a couple of instant classics — Such Great Heights and The District Sleeps Alone chief among them. Sadly, Former Lives is Gibbard at his most serious, which means that it's completely excruciating for pretty much the entire time you're listening to it.

This record, while only days away from being regarded as a weird, sad footnote in a career full of great songs, is being promoted like crazy all over the world. Most of the interviews making the rounds right now make mention of the opening track Shepherd's Bush Lullaby, which, Gibbard is only too happy to report, was recorded while walking in the London rain. It's one of the most cringe-inducing songs this listener has ever heard.

"In London It's raining, but I'm not complaining, as I walk in the grey afternoon," he sings. "Under my umbrella, I sing a capella, this melancholy, whimsical tune."

Chalk it up to heartbreak and wait for the next Death Cab record. In his defense, If we had just broken up with Zooey Deschanel, we'd probably be just as blubbery. Poor guy.

Check out the video for the excellent Postal Service track The District Sleeps Alone Tonight if you need a reminder about what a great artist Gibbard is actually capable of being.