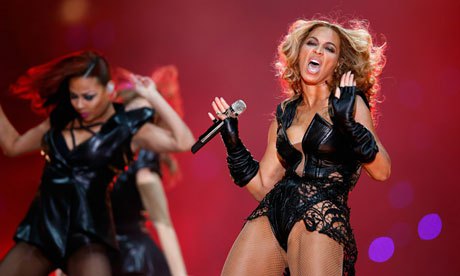 Is it wrong to point out how much skin is showing?  Is it demeaning?  Is it sexist?  One thing I know for sure is that it is not about lip-sync. Whoa… No pun intended.

Seriously, I know that we have all had enough news about the lip-sync “scandal” at the President’s inauguration.  So much so, that I could not bring myself to write about the fact that she actually did sing live during the Super Bowl half-time show!  Try moving like that and singing like!  Incredible!

She didn’t just sing well, she danced well, and she nailed it! She gave a stellar performance.  It was energizing. The effects and pyrotechnics were amazing.  The entire game was great family entertainment, unless you have a 60″ inch wide-screen high-def television with young kids in the room and come from a conservative background.  See anything? You can click the picture to enlarge it (lol!) The truth is, there maybe nothing there, other than what is left to the imagination. 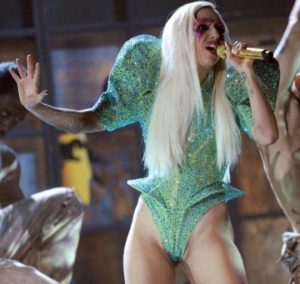 Regardless of what you may or may not see, this is not another wardrobe malfunction. That is an award that goes to Janet Jackson and Justin Timberlake.  In fact, this is not even close to the sorts of wardrobes that are censored these days.  Do you remember the 52nd Grammy Awards?  Lady Gaga wore a teal colored outfit that was pulled up so high, that even I became slightly embarrassed with my kids in the room – and I don’t come from a conservative background. So congratulations to Laday GaGa for holding on to first place in the Camel Toe Awards.

What does it mean when these stars appear with so little clothing on public television?  Perhaps sexuality is becoming less sensational by the very fact that it is allowed without so much consideration.  Maybe that is a good thing.  America is quite a conservative country when you compare it to Germany or Japan.   All this is not to say that there is not an abundance of talent that sustains the performers on their own.  But wearing less and moving your hips more seems to be part of the show and part of the sales.  It continues a long history of  controversy.

Because we’ve had several opportunities to see different sides of Beyonce (again no pun intended) I am going to hold to the opinion that Beyonce is extremely classy.