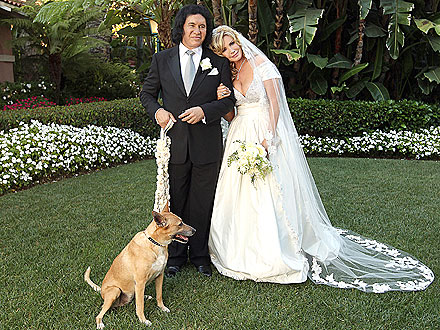 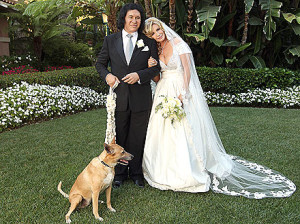 It is now official! KISS Rocker Gene Simmons finally took the plunge and made his relationship official with longtime girlfriend, Shannon Tweed. The Tweed-Simmons wedding finally happened and as per Shannon Tweed’s twitter post on October 1, she states “I’M GOING TO GET MARRIED TODAY!! TO THE MAN I LOVE.” The nuptials took place at The Beverly Hills Hotel in front of 400 close friends and family, including Hugh Hefner, Bill Maher and the entire KISS family. After 28 years together, Gene and Shannon are now, man and wife. The Tweed-Simmons wedding was one many fans have been looking forward to (well maybe not the single ladies?). On the Gene Simmons Family Jewels episode that aired back on July 26, Gene got down on one knee in Belize and finally, FINALLY proposed to the love of his life, Shannon Tweed. We are all so proud of you Gene!

So now that they are officially a wedded couple, what is in store for the Tweed-Simmons clan in the future? According to A&E, the Gene Simmons Family Jewels show resumes on October 4 with a one-hour premiere. The wedding will be shown sometime during the new season, so fans will be able to see first-hand some of the best highlights of the couple’s big day. Hopefully the bride and groom will also be able to take some time off and enjoy another luxurious trip (similar to Belize) for their honeymoon. Maybe a jaunt to Turks and Caicos since Gene is supposed to own an island there?

Surely there will be many more episodes filled with highlights of Gene’s concert tours with KISS, as well as hysterical fun, mayhem and sarcastic pokes. Despite the past rumors of infidelity, it seems Tweed and Simmons have worked out their differences due to their genuine love for one another. The couple’s kids and families have to be so proud of dear old dad for finally stepping up and taking this giant leap. No one (including Shannon) ever thought this day would come. It seems Gene realized his mistakes and what is truly important to him. Just like the old saying from the Cinderella song, “You don’t know what you’ve got, ’til it’s gone,” Gene lost Shannon for a time and found out the hard way, you cannot mistreat your loved one’s and expect them to want to stick around. Congratulations Gene and Shannon and may you both have many, many more happy years together!