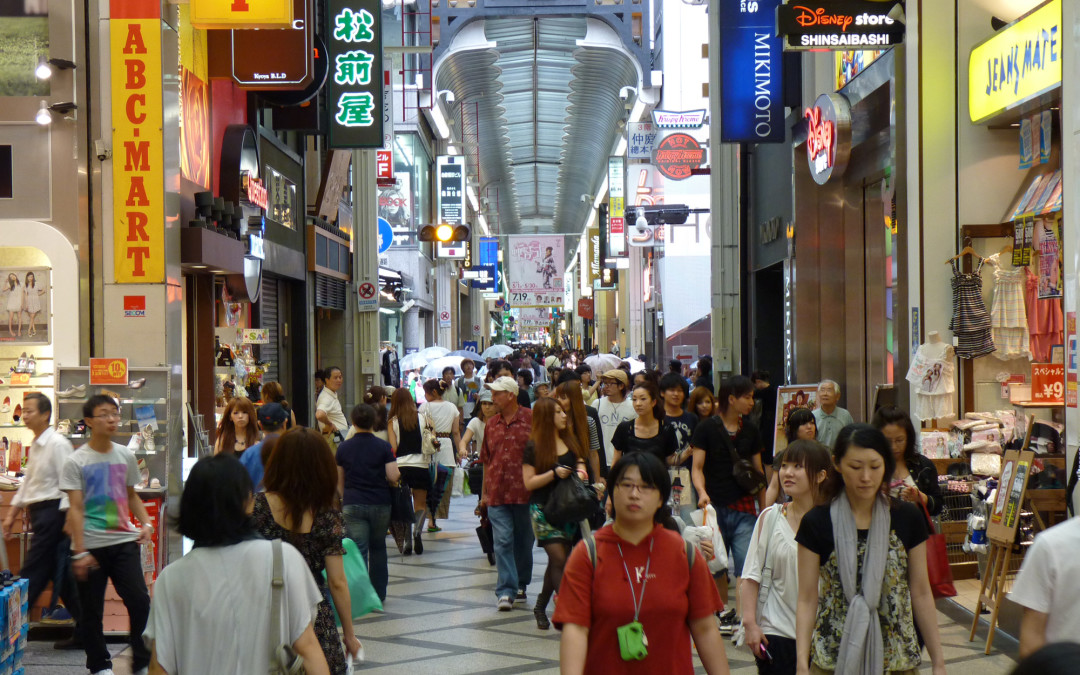 When I tell stories about my time in Japan, this one often comes to mind.  I’ve told the story so many times, that I figured it’s about time to blog it. 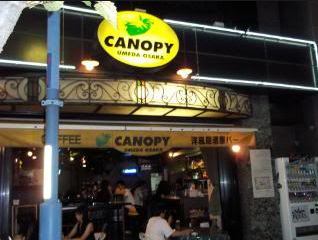 During my last year in Japan, I was working at a gaijin bar called “Canopy” – a bar that was friendly to foreigners, but also had many Japanese regulars.  I bartended there.  It was a short-lived job for me, and I’d be surprised if I had worked there for more than a year.

Unlike here in the US, we were encouraged to drink with the guests.  Many Japanese customers would come in and offer to buy me a drink.  We’d often speak in English, and it was a good time for them to brush up on their English skills.  But it wasn’t just a language exchange.  Many times, a customer would want to take me to really nice restaurants to introduce me to Japanese food [needs a blog post.] It seemed that there may have been a self-serving status role involved, in introducing the foreigner to the finest foods that Japan could offer.  But there was also a sincere enthusiasm that some people had, as well.  Nothing was expected in return, but my gratitude, which was almost always sincere.

In any event, this job provided a good opportunity to wind things down, and start readying for the return to the US.  I am married with two kids (both were born in Japan [needs a blog post.])  We had a lot of work ahead of us.  My last day on the job ended with a bit of excessive celebration.

I worked long hours.  Quite often I’d spend 10-12 hours at work, beginning around 4 p.m. and getting home around the same time in the a.m. hours.  On this particular night, I was pretty drunk by the time I was finished.  So much so, that instead of just hopping on my bicycle with a bell and basket to get home, I walked around to the other side of the bar to have one more drink.  Before that, I had a quick celebration shot with my co-workers.  And I took off my “Canopy” sweatshirt for the last time.  As I did that, my undershirt pulled up with it, and I stood there shirtless in the middle of the bar/restaurant. OK… nothing too weird about that, except for the fact that I had band-aids on both of my nipples [needs a blog post.]  Believe it or not, there was a perfectly good reason for that – well, somewhat insane.

The bar became completely quiet, and one of my Japanese co-workers asked me in Japanese, “Why do you have band-aids on your nipples?”  Feeling embarrassed, my mind went into a frenzy that could only be accomplished by a lot of drinking and humiliation.  I uttered the first words that came to mind – “fufugenka.”  I had a perfectly rational explanation.  In fact, an explanation that was even somewhat respected.  It was an explanation that everyone at the bar new about.  They had seen it happen on national TV.  Yet, here I was, making some ridiculous excuse.  “Fufugenka” is a marital dispute.

I never finished that last drink.  Instead, I tilted over from the bar stool, hit my head on the ground and didn’t wake up until the bar manager [needs a blog post.] was shaking me telling me it was time to go home.

I looked around and the bar was empty.  I was still lying on the floor.  “I’m glad you’re ok,” he said.  When you hit your head and vomited, I wondered if I’d need to call the ambulance.”  Apparently, he didn’t.  Instead, I had been left on the floor, covered in my own vomit, while people stepped over me.  I can’t even imagine that some guests stayed after that.  After all, this was one of the cleaner bars in the area.

I got up, dizzy and still confused.  I headed outside, got on my bike, and started to pedal home.  It was a brisk one-mile ride. Almost all of the trip took me through large covered walkways that were only for bicycles and pedestrians.

Japan is always busy.  Osaka, being the 2nd largest city, was certainly no exception.  That area at 4am, was like Chicago during the middle of the day while supporting the Chicago Marathon.

People in Japan, would not say “excuse me” when they bumped into each other, because it was just an expected occurrence.  However, as two drunk older Japanese men approached me, staggering from side to side, we had such a hard collision that it was impossible to say nothing.  Immediately they began cursing me in Japanese.  Only they didn’t know that I understood, and when I spoke back sharply in defense, both men looked shocked.  In fact, they even began apologizing and they ran off, before I had an opportunity to say everything I had wanted.  I wondered if my words were too strong.   Perhaps they thought I was ready to fight.  No… that wasn’t it.  It took me a moment to realize that when we had collided, I bumped my nose so hard, that it was literally gushing blood all over my sweater and jeans.

So there I was, trying to get home on my bike with a basket and bell, covered in vomit and blood.

Being in Umeda (the heart of Osaka)  I’d pass a lot of hostess clubs [needs a blog post.], where young girls would stand outside, look cute, wave and say, “Irasshaimase!”  Even I was not ignored, which was uncommon, because a lot of these bars did not welcome foreigners.  But after 10 years, I was recognized; not for attending the hostess clubs.  I was appearing on television enough, that I was often recognized, and was often stopped and asked to sign autographs or take pictures.

However, on this particular night (my last night at work,) they did not welcome me.  There were no friendly shouts of “Irasshaimase!”  Instead, there were a lot of heads turning away, and looking down as if they didn’t see me at all.  This was a common gesture when somebody felt ashamed for another person.  Like the large group that surrounded me on my first day of golf in Takarazuaka… but that’s another story. 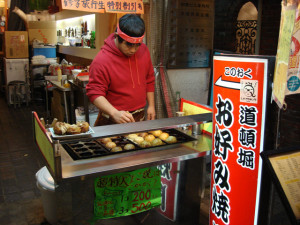 Oh boy, I thought to myself.  What was I going to do.  Noriko wasn’t going to be happy.  Here I am at 4 a.m. covered in blood and vomit.  As I got closer to home, I approached a takoyaki stand.  It was a mobile food stand that was often set up in that location, and Noriko loved takoyaki (octopus in a fried batter.)  Surely that was the solution, I thought to myself.  I ordered a dozen takoyaki, and waited as it was being prepared.

Staying still on my bicycle was more difficult than moving forward.  Suddenly, I leaned backwards, never letting go of the handlebars.  I lifted the front wheel all the way up, and I fell backwards on to a taxi that was parked behind me.  I hit my head, and stood up.  My head was cut, but not too badly.  Although it was another place that I was now bleeding from.  The taxi took off for who knows what reason.  I could probably think of many.

Long story short, I received the takoyaki and made it home.  I stumbled into my apartment, and said, “Noriko, I’m home!  I got you takoyaki.”  As if she was going to be up waiting to eat at 4 a.m.

She walked into the hallway, and suddenly I vomited again.  It was a monstrous vomit that you could compare to Linda Blair’s famous scene in The Exorcist.  I managed to cover both walls, the floor, and the ceiling!

That was all I remembered of the night/day.  But here’s what really stood out.  When I woke up, everything was clean.  Myself, the apartment, everything.  My wife had cleaned everything.  Even more amazing was the fact that she didn’t get angry at me.  She never spoke a word about it.

I know I was reckless and irresponsible to drink so much.  Today, I would never get away with such a thing, and I imagine my wife would leave me on the floor like my manager had.

I’m not sure that’s the best opener for my stories of Japan.  But that’s the first one you get, and there are loads more to come.