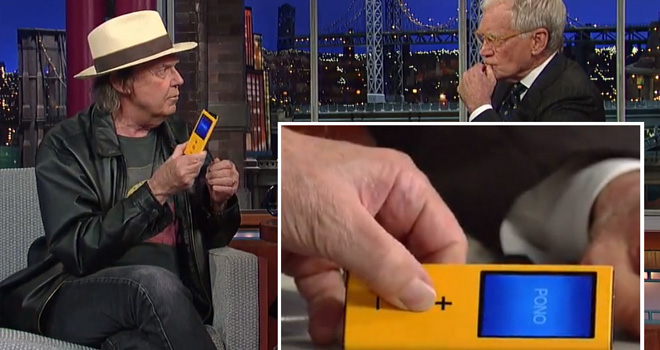 Internationally celebrated troubadour Neil Young appeared on The Late Show With David Letterman this week to promote a new portable digital audio player that he's been working on. Dubbed Pono, the triangle-shaped device aims to compete with iPods by offering the "highest possible" audio fidelity available.

Not just a player, the as-yet unreleased Pono will (according to Young) include advanced conversion technology and an entire iTunes-like ecosystem for downloading content. Young is reportedly working closely with all of the major record labels to properly digitize their back catalogs and offer them up for sale on the platform.

Young has always been an outspoken critic of the sound of MP3 audio. While the rise of digital music has been undoubtedly great for portability, Young is among a growing number of audiophiles who are no longer willing to compromise on the sound. Young has been showcasing what Pono can do for some famous friends, some of whom have referred to the technology as nothing short of a miracle for music lovers.

"It's not like some vague thing that you need dogs' ears to hear," said Red Hot Chili Peppers bassist Flea. "It's a drastic difference."

While no release date has been announced as of yet, the interestingly-shaped Pono (named for the Hawaiian word for 'righteousness') is available to anyone with access to Neil Young's pockets.

Check out the entire interview below, and before you ask: no, it doesn't have a delicious chocolate center.