Oops… I Joined A Japanese Cult! 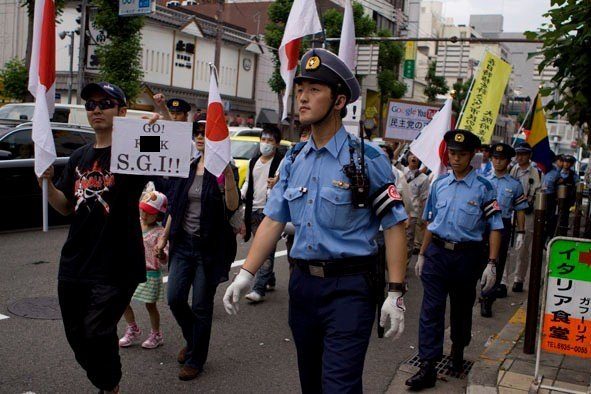 Cults often target the weak.  And I was at a very vulnerable point in my life.  I practically ran away to Japan in 1995 (where I stayed for 10 years) to escape a turbulent past that I had not yet come to terms with.  Little did I know, I was walking directly into more problems.

I need to give you a quick background of the family I married into.  When my ex-wife (who was Japanese) was 15 years old, her brother walked into her room one day, only to find her having sex with a man in his late 40’s.  That man was a good friend of her parents.  As it turned out, this had been going on for an extended period of time.  The initial reaction of the parents was complete anger.  Her dad, who was the equivalent to the “Bob Hope of Japan” at the time, had even considered using his connections with the Yakuza to have him killed.  But the situation deescalated.  Part of that process involved a separation between her parents.  Her dad began a new family, but never divorced.  Divorce was taboo in Japan.  But apparently having kids and starting a new family with a mistress was ok.

Here’s where things get really weird.  Her mom eventually forgave the man for having sex with their 14-year old daughter. In fact her mom and that man, began to date.   He would spend many nights at their home.

When I first arrived in Japan, my ex-wife and I lived with her mom (and often her mom’s boyfriend – aka the pedophile.)  My ex-wife would often walk around their home in nothing but her panties and bra.  In fact, her younger sister would do the same.  I thought it strange that her sister would do this in front of me.  And I found it upsetting that my wife (at the time) would do this in front of the man she used to sleep with as a child.  I talked to her about it one day, telling her to stop.  It created such a huge argument, one morning as I was leaving for work, that she stood on the 12th floor balcony of their home and threatened to jump if I didn’t come back.  She was very manipulative and a great bluffer.  She was pure evil.

I was in hell.  I had severe anxiety issues and panic disorders.  I would break down and cry from time to time.  I had lost a tremendous amount of weight.  It was perfectly clear that I was a troubled soul.  Occasionally, strangers would approach me, and say the oddest things.  And in a nation full of cults, I was a target.  Only I didn’t know I was already slowly being recruited.

My ex-wife’s brother’s friend died in a tragic accident.  His car broke down on the side of the road.  When he got out to check the engine, a truck slammed in to the back of it, and the car plowed over him, killing him instantly.

Going to that funeral was the first funeral for me to attend since my cousin had been murdered and I was terrified to be there. I was still traumatized by the murder and funeral of my cousin. I cried a lot at this funeral in Japan.  It caught people off guard, as they wondered how close I was to the deceased.  It was a few days afterwards, that her brother approached me, asking me to join Soka Gakkai.  He told me it would make his heart happy if I were to join.  I was sympathetic to people in pain, because I myself was in a tremendous amount of pain.  This entire family was a member of Soka Gakkai, and I’m sure they were waiting for the right moment to have me join.

Now before I continue, let me tell you about Soka Gakkai, because every member will tell you it is not a cult.  They’d almost have you think that it was like a denomination of Buddhism.  In fact, it is a world-wide organization.  But you can ask many non-members in Japan, and they will talk about the organization with great suspicion.  The fact is, many factions of the organization engage in strange behaviors.  And the family that I belonged to was absolutely no exception.

Wikipedia defines it as a movement that “is publicly involved in peace activism, education and politics. It has also been at the center of controversies… that grapples with the stereotype of a brainwashing cult.”

Here is what resonates with me the most (stated by Wikipedia) “Soka Gakkai’s expansion methods were controversial, as it employed a Buddhist method called shakubuku, translated as ‘break and subdue.’ …urging its members to adopt an attitude of openness to others”

When I joined, I was taken to some sort of building that resembled a recreational building more than a temple or place of worship.  After meeting some people, I was taken to a room, where I was surrounded by 20-30 people.  I stood in the center with a monk, who put juzu beads around my hands.  Everyone then began chanting, “Nam Myōhō Renge Kyō.” The chant is to express “Devotion to the Mystic Law of the Lotus Sutra or Glory to the Sutra of the Lotus of the Supreme Law.”  This is a chant that I was well-familiar with.  My ex-wife and her family and friends would chant all the time.

I looked around me, at the people who had encircled me.  All of them were crying.  I later asked my ex why they were crying.  She told me that they were so happy for me.  So that was it – as far as the books of registered members go, my initiation was over.  I was a member, but they were not through with me by any means.

They tried to break me, in every possible way.  They were well aware of my weak state of mind, and they took advantage of it in every way possible.  They drove me further into insanity, waiting for that hook, that I’d never be able to walk away from.  I was a perfect candidate for bowing into pressure.  I hardly had two feet to stand on, and they would knock them out from under me with every chance they had, so that I was more and more dependent on them.  I was humiliated in public several times.  And even at home, where I was not allowed to close the bathroom door, when I needed to use the bathroom.  You might wonder why I hadn’t just closed it anyway.  I was completely broken.  I’ll save the explanation of that process for another time.

I was often set up in the most precarious of circumstances.  One tactic that I noticed several times, was that they tried to create infidelity in my marriage.  Usually this was with friends (other member’s of Soka Gakkai.)   But once it was even with my ex-wife’s sister-in-law.

One day, we all took a trip to a hot spring.  It was myself, my ex-wife, her sister and brother, her brother’s wife, her mom, and the pedophile (all Soka Gakkai members.)

When we got there, they explained to me that this hot spring was quite different than the others, and they were more like bathtubs only large enough for one or maybe two people.  They insisted that I bathe naked with my ex-wife’s brother’s wife.  Nobody else was going to bathe.  They wanted me alone and naked with her brother’s wife.  I refused.  They continued to break me down and try to put me in compromising positions in the many months that followed before I finally divorced – my first big step on the road to recovery.

Even after I quit, I would receive knocks on my door (my new apartment) at very late hours of the night.  Soka Gakkai members wanted me to buy a Butsudan, and asked that I join them for a late dinner.  It took many months of these late night disturbances, before I finally got rid of them in the strangest and unintentional manner.  I got sick and threw up all over them!  Several years later, I saw my ex’s mom.  Her mom explained how her daughter had remarried, but could not have children.  She blamed me, saying that I had caused her too much stress.  I was also told that I’d have to pay for her final year of college. Her aunt even threatened to kill me if I did not pay.  I don’t know why they put that financial responsibility on me.

So there it is.  I had no idea what I was getting into.  One thing is for sure, I absolutely joined a cult.  It was a decision that I made simply with the idea of trying to heal her brother’s pain.  But in actuality it was much more of a coercion.