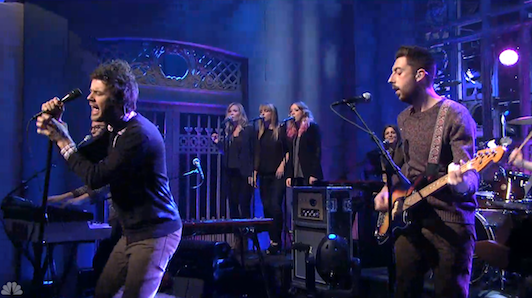 Critically-acclaimed and criminally under-heard synthpop outfit Passion Pit took to the stage at Saturday Night Live with a vengeance this weekend, performing the two best tracks from their excellent sophomore album. Glossamer tracks Take a Walk and Carried Away managed to (sorta) blow the roof off the place, besting every other musical performance so far this season.

Passion Pit mastermind Michael Angelakos was in rare form, a seemingly reborn version of the man who cancelled several Passion Pit shows this summer due to his apparently severe Bipolar Disorder.

In case you missed it, watch the performances below, courtesy of NBC.